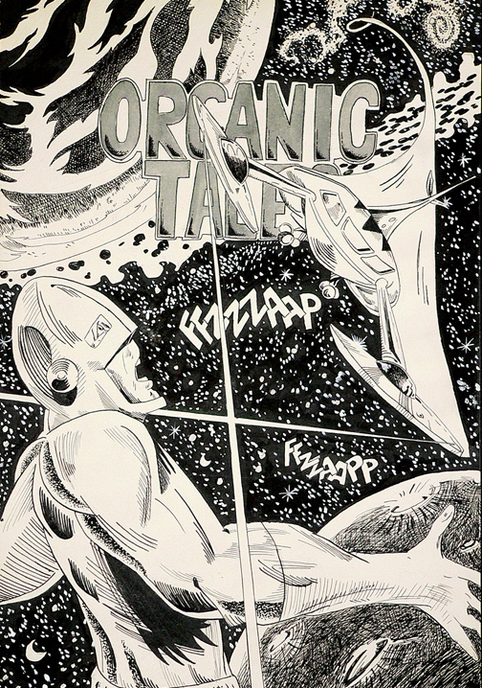 1977, when you look at it as a date it seems like a long time ago but so much of what happened that year is still very vivid to me. Besides all the headline stuff like Son-of-Sam and the Yankees Billy Martin problems Bill and I were doing a big 2 part Beanman story with Splash pages, bad guys, girl friends, talking suits and whatever else we could think of and we thought of a lot. There were many hot humid nights spent working out page layouts and getting the dialogue right but when it was done we had what was for us an epic story that took Brian/Beanman from Earth to space and back again. It could be where I get my exploding ship crutch I use so often. We always thought we might try and get this story published but we never did. Part 2, which is what you are about to view, was done with a lot of excitement due to how part 1 had come out. I remember really liking the cover and the fight scene with Mayham. When it was completed I know we poured over the pages reliving all the moments in it's generation and the feeling of real accomplishment to have finished it. However, with that satisfied feeling also came a feeling of loss. Loss for the times we had just spent creating this story, loss for Beanman because we didn't have another story waiting in the wings and loss for a summer that had been one of the best I ever had.
Kimball Thorpe -November 2009


It is hard to imagine Organic Tales 5 without the influence of Star Wars during the summer of 1977.George Lucas's space fantasy came out early in the summer and every one was going
to see it. Kimball and I went together and like others, loved the movie. For the first time a comic book type movie had unparalleled special effects and was getting huge attention. What we had been enjoying in comics was now on the big screen.Organic Tales starts with the suit giving a history of the long intergalactic war raged between Beanman's and Mayham's planets. The suit informs readers that he has been passed down through a series of different Beanman. These plot inventions were heavily influenced by seeing Star Wars, just as Lucas had himself been influenced by different comic books. Organic Tales 5, for me, really points to a direction for Beanman's future. Sadly, that future would have to be put one hold. After moving to New Hampshire Kimball and i would see less of each other and Beanman comics would only sporadically appear in different forms, none living up to the magic and potential of those early years.
-Bill Mitchell November 2009