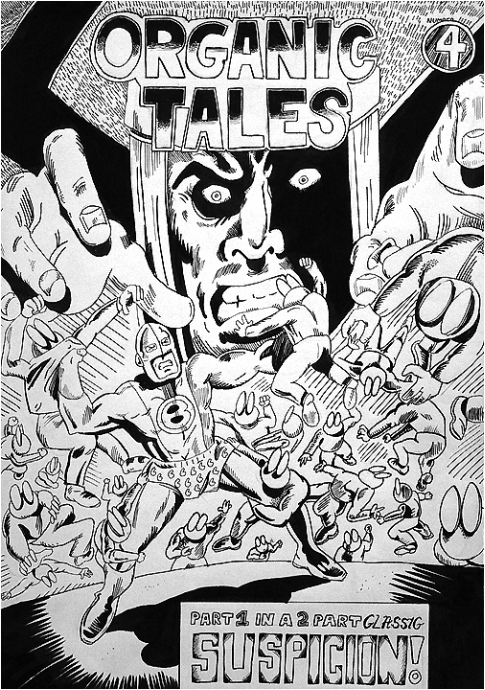 The summer of '77 was my graduation from High School and a big party summer before going off to college. I can remember sitting on the hood of Bill's car discussing the future and back in '77 we knew we'd be doing Beanman we just didn't know there was going to be almost a 25 year void. Bill and I made our best Beanman story that summer and were extremely proud of what we'd done. While we figured we'd just keep doing them long distance the reality was that we didn't get much Beanman stuff done after that summer. This is my favorite story not only for the story itself but the art is the best we had done so far and the over all look was finally coming together. I loved the Little Creeps and still want to work them into a Beanman story today because they are so much fun. Enjoy this 2 part saga which has everybody in it and even some ingenious devices that were ahead of their comic times(spying birds). Dr Doom used one years later and it was eventually used in the movie My Girlfriend the Superhero. But we were first. Kimball Thorpe -June 2009

In many ways the Summer of 1977 was a personal turning point for me. I had just finished my freshman year of college and had returned to my hometown of Catskill to summer employment at the Catskill Game Farm. The job was hard and dirty. Thankfully, most nights Kimball would come over to my house and we would work on our latest Beanman comic. The story was longer and more nvolved than the previous work, developing a history of previous Beanmen and establishing Mayam as Beanman's arch foe. It was hot working at my small drawing desk and we were tired, but our love of drawing comics propelled us forward to finish. We did not know at the time that this was to be an end to our close collaboration on Beanman for many years. Later that fall my parents would announce their decision to sell our house in Catskill and move to New Hampshire. At 18 years old the small town life that I knew and enjoyed in Catskill would come to an unexpected end.
Bill Mitchell -June 2009 (to be continued)