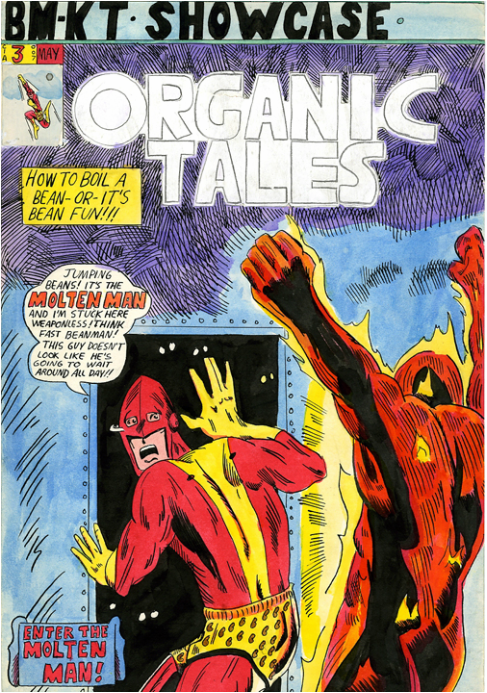 Enter Organic Tales #3!
Introduction to Organic Tales #3
Beanman meets the Molten Man.
All I can remember about Organic Tales #3 is that I was a freshman at Oneonta State College at the time. Kimball and I were having a hard time continuing Beanman because of the distance between us. Because of this, I was trying to crank out what I could with Kimball coming in and drawing certain sequences. Looking at the story now, I am amazed we were able to get anything done at this point in our lives.
The story lines swipes material from all over the place. The Molten Man was inspired by "The Lava Men" and "The Infant Terrible" from issues of Thor and The Fantastic Four. I also think we borrowed from the original Star Trek episode "The Squire of Gothos". In the episode Captain Kirk's strange advisory Trelaine is finally revealed to be a naughty alien youth, scolded by his alien parents.
I see a little of King Kong in the story too. Strange creatures are often misunderstood as monsters in literature.

Organic Tales #3 was the only issue colored.To this day I get Beanman's costume colors wrong when I am coloring him! Looking back I am left to wonder"Where did we find the time to do all this?"
Bill Mitchell -February 2008